Sometimes a source just clicks. Sometimes the writer just jumps from the page and one begins to feel like they know the individual personally. This is how I feel about ol’ Patrick Horsbrugh–or Patty, as I like to call him– an architect and urban planner who, in 1963, published the report, Pittsburgh Perceived: A Critical Review of Form, Features and Feasibilities of the Prodigious City. I stumbled across Pittsburgh Perceived by accident whilst searching for another work on Google Books. But accidents can be fortuitous. Pittsburgh Perceived is a brilliant source for those who research environmental history, Pittsburgh history, park history, or the history of urban planning and has proven to be a crucial source for my dissertation and several conference papers, including “’Unsurpassed Natural Setting for a Great City’: An Urban Renaissance, Point State Park, the Ohio River Valley, and the National State Park Movement,” which I will be presenting at the New Paths in Environmental History of the North America and the Ohio Valley conference in October.

Here are a few of my favorite gems from Patty hidden within the report:

The most useful idea in Pittsburgh Perceived for my own research is what Horsbrugh calls the three natural advantages of Pittsburgh: water, topography, and native flora. From these three base ‘natural advantages’ I have been able to reconstruct the ‘natural’ character of Point State Park, which upon first glance appears to be an entirely artificial environment, connecting the park to the land around it to the psyches of Pittsburghers and visitors, past and present.

Water: Restoration and reclamation of the river fronts was one of the prime objectives of the Pittsburgh urban renewal project. Point State Park is designed to enable the visitor to experience first-hand the massive convergence of three great rivers.

Topography: Point State Park enabled the populace to step out on the point, their view unencumbered by urban development, and experience the majestic presence of the cities hills.

Native Flora: This third natural characteristic is the one that the Point State Park planners had to recreate. While the topography and rivers had survived the years relatively unscathed, the natural fauna of the point had been completely obliterated by the industrialization of the city. The vista of the river and the city’s hills would not be complete until it was framed by “native trees grouped naturalistically simulating the forests that [had once] covered the river banks.” Park planners were determined to bring the Point back as close to its primeval condition as could be afforded by the artificial environment.

I argue that the visitor to Point State Park was supposed to be able to step out on the point and be enveloped by the sky, the water, the trees, transporting them back to a time when the western horizon still held unlimited possibilities. Point State Park illustrated that “the hills and rivers, little changed by man since early days, [can] provide a majestic memorial far more impressive than any man-made memorial.”[i] It is an illustration of the fact that man’s history and nature are inextricably intertwined. That man’s connection to nature can be as psychological and it is material, allowing the definition of nature to grow and evolve with the needs of its human definers. 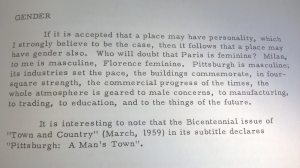 There is no mistaking Patty for a man of a time other than his own. My favorite instance of this is a discussion of gender in relation to cities. Pittsburgh is masculine, he argues, because it is ‘geared to male concerns.’ Because women are silly and not concerned with education or the future or anything serious like that. Let’s just take in this ‘charming’ instance of past sexism and cross our fingers that we continue to move away from these notions as a society.

Point State Park is so cool, right? It is symbolic of Pittsburgh’s renewal. The view from Mount Washington would not be complete without the park and its fountain. There is no way anyone could be against such an obviously good idea…wrong. Patty thought the park proposal was real stupid.

“The Point Park must surely rank among the most ostentatious examples of financial disregard…Fortunately, conditions permit extravagances of this kind from time to time, but the deliberate abandonment of the commercial opportunity represented by this singular site may prove to be very short-sighted indeed, unless after completion of the park, its popularity as a resort greatly exceeds expectations.”

Told you he hated it.

“The proposal for the Park at the Point would be more appropriate for the climate of New Orleans than Pittsburgh, or for the spectacle of Niagara Falls, than the tranquil Three Rivers confluence. The position is the reverse of the physically dramatic eminence of Quebec, and for some observers, it may lack the emotional impact of Battery Park. The historic associations with the Point are of great importance, but the fortification reconstructions overlaid by traffic routers are a ludicrous piece of pastiche which will neither satisfy the historian nor attract the tourist. Seldom can there have been an instance of such confused thinking. The exact site of the original fortifications is used for the partial reconstruction of the defences in a position where the highway lanes could not yield to romantic desires. The resulting combination of ramparts and flyovers form a composition that is less than worthy for such a location. This position represents a moment of impact, an instance of incomparable civic grandeur, a location of great potentiality, and a rare example of easy association between buildings, bridges and highways. It is unfortunate that this compromise between sentiment and function should have occurred. It is even more unfortunate when the high standards in historic reconstruction and exhibition are being fulfilled in other parts of Pennsylvania and the nation. The relative merits of this endeavor must be held in question.”

That’s right, Patty says your park and its highways and stuff are dumb.

“The Point is a feature who importance far exceeds its immediate relevance to the Golden Triangle. The Point is a significant factor in the Mount Washington outlook. it is, indeed, the focus to which the eye is naturally drawn upon which the attention is held. After the removal of the point bridges, the resulting void will be undeniable, and the plea to provide purpose for the Point is certain to be heard again.”

“Why’d you remove those bridges, they were great!”- Patty 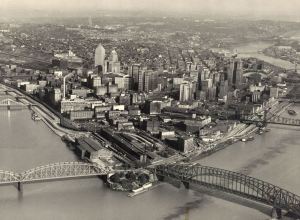 Joking aside, was Horsbrugh partially correct? Was Point State Park a mistake? Did it live up to its expectations? Check in with me in a year or so, hopefully I’ll have a well-developed answer.