The West as America: Reinterpreting Images of the Frontier, 1820-1920 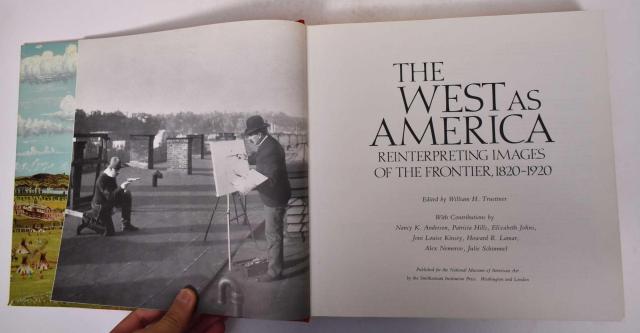 The painting examined in The West as America: Reinterpreting Images of the Frontier, 1820-1920 are much the same as those looked at in The West of the Imagination and Discovering Lands, Inventing Pasts. The essays in The West as America do not humor the consideration of artist innocence like that portrayed by the Goetzmanns in The West of the Imagination. Instead, they take a similar path of scrutiny and revision as the essays in Discovering Lands, Inventing Pasts. The West as America, as a whole, looks at the manners in which artists sold their skills to the highest bidder in order to extol the virtues of progress—the ideology that ruled the day. The artists in these essays are reasonably aware of their role in the expansion process. The writers in The West as America are ultimately interested in tracking the way national identity is shaped by cultural undercurrents. Art, according to these writers, is the moderator between reality and ideology, in this case progress, and thus has a significant power to persuade. In art and real life, William H. Truettner argues that myth and ideology are separate entities that continuously overlap in western art. Myth assures people that progress is guaranteed and can be gotten without social or environmental detriment. Ideology, is much more subtle, and endows the expansionist mission with legitimacy and righteousness. The subtlety of ideology is unsettling because its persuasiveness is often hard to detect.

As mentioned before, The West as America highlights the important of progress in the western frontier process. Progress was imbedded in all of the major intellectual and ideological currents of the time period, such as biological and social evolutions. In the context of this highly progress-driven society, it can be argued that it was inevitable that Americans would view westward expansion as a progressive crusade undergone by virtuous Easterners. Like Anne Farrar Hyde, Truettner emphasizes the role of eastern elites in shaping the frontier process. Artists were typically swayed by the beliefs and wants of the wealthy easterners for whom they were painting. Much of the art focused on the difference between East and West, a kind of bifurcated geography. Truettner also expresses that we should not move to quickly condemn these individuals for selling out or propagating ideologies that we now find offensive or dissatisfactory. Like R. Douglas Francis, Truettner extols a kind of postmodern, multiplicity perspective. He states that we must divorce ourselves from the assumption that history is fact and instead embrace the fact that everyone experiences history differently and are products of their time and place. Elizabeth Johns, in “Settlement and Development,” puts down an interesting argument in regards to the duty that Americans felt to, as good citizens, spread the fruits of their labor and virtuosity across the continent. Images that depict settlement and development tend to emphasize the fact that these pastoral individuals have the same social respectability and worth as eastern elites, that western exploitation was not possible without technology and hard work, and that social classes and individuals that acted outside the realms of decency were quickly clamped out.

All of the books in this section, and many in the past, particularly regarding film and literature call attention to the ways in which whites exploited the Native American image for their own means. In “Inventing ‘the Indian’,” Julie Schimmel nicely summarizes the arguments made by these other authors and injects some of her own unique observations. Initially, in the late eighteenth and early nineteenth-centuries, the Native American was viewed in the Cooper point-of-view, as a romantic savage. Schimmel smartly points out that portraits done in this era, though fairly positive, immediately subjected the Indians and their countenances to such concepts as individuality and vanity—values that the Native Americans themselves did not place significance on in their own culture. The artists were placing their own western values on incompatible images. Once expansion really took hold, the Native American was now seen to be in the way, and, in the face of removal and Indian wars, the images evolved into ones of barbaric savagery. Paintings typically pictured the duality between civilization and savagery. Once their threat was eliminated, Americans could mourn their downfall, while simultaneously embracing its inevitability.