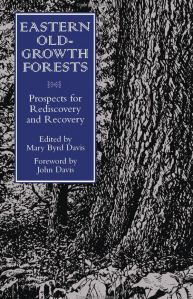 I just began reading Eastern Old-Growth Forest: Prospects for Rediscovery and Recovery (1996); just began is not an overstatement, I just finished the Foreward. Nonetheless, a passage in the Foreward by John Davis demands a brief comment:

“Even as it underscores the importance of whole communities and ecosystems, old growth assures us quietly yet grandiosely that individuals really do matter. That a 200-foot-tall white pine in Pennsylvania’s Cook Forest matters cannot be gainsaid; that the members of the Cook family who have saved their namesake forest have performed deeds of heroism is beyond dispute, except by those who oppose life. The same could be said of other champion trees and champions thereof, wherever good people saw to it that big trees would continue to photosynthesize until natural mortality changed their role to recumbent home of myriad animals.” (xii)

“that the members of the Cook family who have saved their namesake forest have performed deeds of heroism is beyond dispute, except by those who oppose life.”

What the what? Firstly, I find it extraordinarily odd that Davis paints disagreement with the self-declared greatness of the Cook Family with comparison to the pro-life movement. I suppose, if we go with Davis, that I am indeed in opposition to life because I take issue with the portrayal of the Cook Family including the current patriarch, Anthony Eaton (A.E.) Cook and his predecessors, as ‘heroes.’ In my MA Thesis, “A Convergence of Recreational and Conservation Ideals: The Cook Forest Campaign, 1910-1928,” I questioned the hagiographic accounts of the founding of Cook Forest written by A.E. Cook, May F. Cook, and other family biographers. My main issues with these accounts are:

1. They whitewash the history of Cook Forest State Park and the Cook Family and ignore the fact that the majority of the Cook Family opposed the state park idea. The siblings of A.E. Cook’s grandfather, Anthony Wayne (A.W.) Cook, even developed a plan to sell the timber behind his back, leading to a familial lawsuit.

2. They make the Cook Forest campaign about the Cook Family and downplay the role of other individuals and forces in the campaign.

3. They isolate the history of Cook Forest from the environmental and economic history of the region.

These are just a few thoughts off the top of my head. I’m sure there are more points to be made.

When someone says something is “beyond dispute,” ya know I gotta get my dispute on.