This post originally appeared on Unwritten Histories as part of CHA Reads 2019. 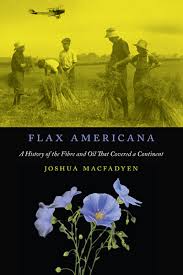 The nearly iridescent blue of the flax flower jumps off the cover of Joshua Macfadyen’s Flax Americana: A History of the Fibre and Oil That Covered a Continent immediately challenging the reader’s perception of this under-appreciated fibre crop. At the same time as one’s eye is drawn to the beauty of the flax flower, one is also pulled into the scene above that juxtaposes the steady stream of labour that flax required with the technological advances of modernity that would change the crop’s use and demand through time. The unexpected vibrancy of the cover serves as an effective representation of flax’s [somewhat unexpected] connection to early household paint. Flax Americana is a book that seeks not to simplify the history of flax, but rather to unveil the complexity of this singular commodity and to trace its colourful trajectory from rural to industrial crop.

Macfadyen uses the concept of the “flax commodity web” to both illustrate and make sense of this complexity. The flax web is made up of five sets of physical human actors (producers, primary processors, secondary processors, applicators, and consumers), various materials (including the soil and nutrients needed to grow the crop and the thread and paint into which the crop was turned), and intellectual and non-physical actors (such as marketers, farm scientists, and state officials). While the actors and materials in the web may have changed through time, Macfadyen emphasizes that the plant did not. Flax is the constant in this story. This emphasis on the plant rather than the product, be it fibre or oil-based, is apparent in Macfadyen’s decision to organize the chapters regionally. Macfadyen follows the flax crop from the Great Lakes region to the Northern Great Plains. It is during this journey that flax becomes enmeshed in the industrialization of North America.

The most noteworthy contribution to Canadian—and broader North American—historiography that Macfadyen makes in Flax Americana is to shatter the distinctions that historians often make between different subsets of history, be they nationally, temporally, or geographically-based. The story of flax is not a Canadian story or an American story; it is a transnational North American story with connections to global trends. As Macfadyen follows flax around the North American continent the interplay between Canadian and American actors is evident throughout. Similarly, Macfadyen breaks down the divide between urban and rural history. Agricultural history is often associated with the rural, but as flax developed into an “industrial crop” it became as connected to the urban industrial centers that produced flax-based products as it was to the rural landscapes on which it was grown. To approach the history of flax from an entirely Canadian angle or an entirely rural angle would be to provide a limited history that would inevitably be incomplete. “This book,” he writes, “is about the ascendancy of the urban industrial complex and how commodities reveal a new relationship between urban consumers and rural people and their environments.” (page 26) Macfadyen’s full-spectrum approach to the history of flax demands us to re-examine the way in which we approach not only other commodities histories, but all historical topics.

The manner in which Macfadyen approaches the subject by region enables him to focus on some of the minutiae of the flax web while still connecting each region to the broader picture. The treatment of labour (both skilled and unskilled) within the text is one of the places in which this attention to detail strengthens Macfadyen’s argument that “human society and even human desires were shaped by the plant.” (page 5) From the pre-industrial rural workforce who pulled flax in the field to the labour gangs needed to keep industrial flax production going in later years, Macfadyen demonstrates the amount of work that went into each of the products that eventually made their way to the consumer. In Ontario, he highlights the work of First Nations peoples who left reserves for seasonal work in flax production, and he also draws welcome attention to gender dynamics amongst flax labourers.

The breath and diversity of sources used by Macfadyen enables him to provide an informative portrait of these labourers through time despite many archival sources, unsurprisingly, favouring landowners, mill owners, industrialists, and other wealthy white men of some authority. Individuals at every level of society and production play a role in Macfadyen’s biography of flax. It is not just the types of sources—which includes census records, advertisement images, and business letter books—but also the way in which Macfadyen uses digital history methods to display this information that makes this book stand out among its peers. I found myself going back to his visualization of the flax commodity web (Figure 0.3, Page 10) throughout my reading of the text as I followed along with how flax moved from each region to the consumer marketplace. Various tables with census information and graphs that visualize archival sources were also indispensable while reading the text. By far the most helpful and engaging digital methodology employed by Macfadyen is Historical GIS (HGIS). HGIS is the transference and visualization of data to map form. For example, Figure 6.1 (Pages 220-221) illustrates the spread of flax across the Northern Great Plains of the United States and Canada from 1889 to 1926. This set of maps illustrates the increase in flax production in this region in a way that is not possible with the written word alone. Other maps, such as the Map of Doon’s built environment (Figure 1.4, Page 44), zoom in more closely to look at the way in which flax production had direct effects on the landscape. In a commodity history that seeks to examine the way in which a product led to anthropocentric environmental change and trace the movement of the commodity across geographic space, this kind of visualization is invaluable.

The ascendancy of flax fibre and linseed oil in the late nineteenth century was, as Macfadyen shows, largely due to the marketers and promoters who championed the crop’s essential role in society, particularly in the beautification of the North American home. It is fair to assert that Macfadyen is flax’s most effective marketer to date. Flax Americana deserves to win the 2019 CHA Book Prize because it successfully breathes newfound life into the complex and undervalued story of this crop’s role in the development of North America’s agricultural and industrial landscapes and crosses the national divide to unite the history of Canada with its southern neighbour.