Promise of Eden: The Canadian Expansionist Movement and the Idea of the West, 1856-1900 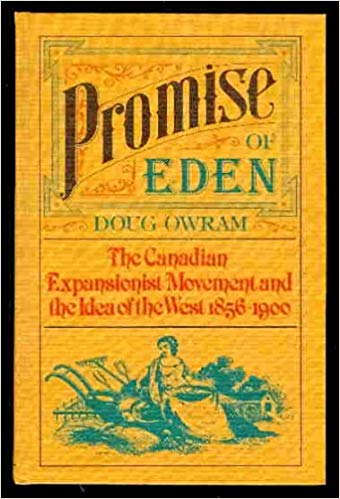 Promise of Eden by Doug Owram is a study of the evolution of the concept of the West in Canadian thought. Owram charts two major transitions that defined the Canadian expansionist movement; the movement from excessive pessimism to excessive optimism and the movement from a centralized viewpoint of the west to a regionalized viewpoint. Initially Rupert’s Land was believed to be infertile and uninhabitable and most Canadians agreed that it should be left for the few pitiful souls that wished to spend their lives serving the fur trade. The Indian was the ultimate representative of the wilderness life, and it was believed that the wilderness was largely accountable for the Indian’s wretched state. Two main events and one “threat” led to a change in attitude towards the west. Firstly, The 49th parallel was declared the borderline between Canada and the United States in 1846. Secondly, the Pacific Railroad enabled travel to the west. And lastly, Canadians were increasingly nervous of America knocking on their door. Subsequently, western rhetoric swerved to the positive as it was now declared to be the land of fertility and the key to future Canadian prosperity. This excessive optimism ensnared many naïve go-getters who flocked to the garden paradise to start a prosperous, new life that was not based on realistic goals or a grounded understanding of the western environment. The land boom and subsequent bust, led many westerners to resent the east, which was increasingly seen as a center of exploitation. The myth of West did not completely disintegrate in the late nineteenth century; however, it was no longer a countrywide vision, but rather an internalized pride on the part of the westerners.

Owram’s account of the Canadian expansionist movement is remarkably similar to Frederick Jackson Turner’s account of the settling of the American frontier. Perhaps an oversimplified judgment of Promise of Eden would pronounce it as merely the placement of Turner’s framework over a Canadian outline. Like in the United States, the West was viewed as a source of national identity, the fate of Canada was embedded in their ability to settle and cultivate the vast wilderness of their hinterland. Progress was the name of the game in both countries’ stories. Owram even asserts that Canadians were greatly spurred by a fear and jealousy of the United States and that in many ways they sought to copy the American experience and did so in many instances, such as their version of the Homestead Act. One major difference between the American and Canada, according to Owram, was that “in the United States society was supposedly to be improved by putting man into a free environment; in Canada it was to be improved by putting institutions in a freer environment.” (145) However, Turner and particularly Theodore Roosevelt, both acknowledged that the settler was bringing with him the institutions of the East, which were then improved by the equal conditions of frontier society. By making the Canadian story of expansionism so close to that of the United States, is Owram not guilty of downplaying the innovative agency of the Canadian people in the same manner that Walter N. Sage was accused?

However, accusing Owram of such inadequacies is not totally fair as Promise of Eden is a very different work from that of “The Significance of the Frontier in American Life.” Firstly, Owram is not presenting Western history as the only Canadian history that is accurate. It is simply one version of the story. Secondly, Owram asserts, echoing Henry Nash Smith, that the Western viewpoint of history is largely based on a myth that evolved from a fictitious land of desolation to a fictitious Garden of Eden. Like Roderick Nash, Owram emphasizes the power of human perception. “Man’s reaction to a geographical setting,” he writes, “is determined not only by what he sees but by what he expects and wants to find.” (11) An individual can change their own perceived reality by way of their own thought processes, thus elevating collective myth above the confines of physical actuality.

Feature Photo: Canada West. The Last Best West. Cover of Pamphlet Canada West, produced by the Dept. of The Interior 1909.