Indians, Fire, and the Land in the Pacific Northwest 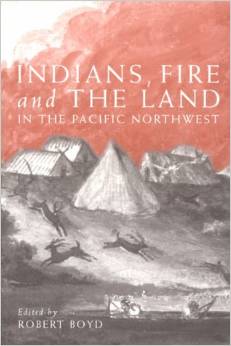 In Indians, Fire, and the Land in the Pacific Northwest, edited by Robert Boyd, various works by contributors across the disciplines are presented in order to paint the fullest possible picture of Native American use of fire in the Pacific Northwest region of North America. All of the contributors match Pyne’s contention that the land that Europeans discovered in the eighteenth century was not pure and untainted, but rather the result of a lengthy process of fire management and environmental manipulation. The Native Americans had created the lawns that were so easily transformed into agricultural communities by the Europeans.

“Topographical, climatic, and ecological characteristics limited how fire could be safely and efficiently used in different ecosystems,” writes Boyd. Or, as Pyne would describe it, the differing fire environments of the Pacific Northwest determined the types of fire regimes that could evolve. The essays in the collection mainly present Native American use of fire as a process that centered on the pursuit of food. Like the Native Americans in Cronon’s Changes in the Land and White’s Land Use, Environment, and Social Change, a portion of which is included in the collection, used fire to maintain berry patches and to increase soil fertility for the harvesting of nettles, tarweed, acorns, and camas, among others. Camas bulbs are of particular interest because their harvesting required the direct management of their bulbs. Camas is an example of how the Native American diet shaped the environment, rather than the environment shaping the Native American diet. The Klikitat Trail serves as an example of how the Native Americans created different subsistence and camping sites, which were used at different times of the year. Native Americans in the Pacific Northwest also used fire for hunting, the circle hunt being an example.

Often these burnings were substantial, engulfing entire river valleys. Native Americans also lit entire valleys for the purpose of communication, and admittedly, these fires did get out of control at times. However, the writings in this collection do not highlight the use of fire for the act of war, as Pyne emphasizes. Whether this omission is due to the fact that these tribes did not use fire for that purpose or because the authors simply did not focus on that fact is uncertain. However, one does find that these writers treat the Native Americans more carefully in their assessment of their fire practices. While Pyne often is slightly harsh in his description of their fire use, probably due to a desire to dissolve the eco-friendly Indian persona, the accounts offered in this collection have a more perceptible mood of admiration. This admiration is not surprising when one considers the fact that one of the main impetuses of the collection is to right the wrongs of the Europeans and their descendents. Indians and their cultures declined simultaneously with the use of controlled burnings, and thus the resurgence of fire will also aid in the resurgence of Native American culture. The writings in Indians, Fire, and the Land, as well as Pyne and others, perceive the main triumph of Indian burning practices to be the influx of biodiversity that resulted from repeated fires. A symbiotic relationship is perceivable in Indians, Fire, and the Land and in Fire in America. However, the symbiosis that Pyne describes is between fire and man. In Indians, Fire, and the Land, the symbiosis is between nature and man, fire being only a intermediary between the two. These writers come to the same conclusion as Pyne, White, and Cronon, that the Europeans upon arrival did not understand that the environment was a product of manipulation, and thus did not appreciate the delicate, diverse community around them, and, by way of farming and other industrial practices, ended up destroying this biodiversity and replacing it with an increasing amount of monocultures.

The key strength of the collection is the fact that it brings together the findings of a very diverse range of disciplines, such as ecology, history, and archaeology, and evidence, such as fire scar samples, firsthand accounts of Europeans, and interviews of contemporary Native Americans, all of which come to the same conclusions, and all of which point toward the positive qualities of managed fire. Like Pyne, Boyd and the contributors are writing with a present-day conscience. Unlike Pyne, who presents the industrial revolution as a somewhat beneficial force that has actually saved the forests of North America, Boyd and the other writers carry the traditional sentiment that capitalism is and was the ultimate enemy of nature and that the Native American way of life was inherently better. They all believe that controlled burning should be reinstated and that fire suppression is actually more harmful than preventative. Indians, Fire, and the Land is a classic example of using history in order to more fully understand the present. Boyd believes that one must fully understand how Native Americans used fire before fire can be reinstated as an institution in modern-day society.