As I’ve climbed deeper into the depths of discipline of history, I’ve found the way that I view the world, particularly whilst travelling, has changed substantially. I’m constantly accessing the background of what lies before me, not just the surface-level imagery presented to me.

In the past, I’ve often wanted to write about my travels when I get home from a trip, but I’ve never followed through. This changes today. I spent much of October in Pennsylvania (with a brief stint in Ohio) and encountered many fascinating sights. I present a brief synopsis of my adventures:

I started my trip in Shippensburg, Pennsylvania, where I attended the 2016 Annual meeting of the Pennsylvania Historical Association. The theme of the conference was “Technology, Business, and the Environment.” One highlight of the conference was a screening and roundtable discussion of the documentary Mira Lloyd Dock: A Beautiful Crusade (which can be watched here). The documentary is based on a book by Susan Rimby, which I reviewed for H-Net Pennsylvania last year. Dock is a remarkable figure that has been, up until now, forgotten in both environmental and women’s history. I highly recommend watching this film and incorporating it into appropriate courses. Another highlight was a roundtable discussing Allen Dietrich-Ward’s new book Beyond Rust: Metropolitan Pittsburgh and the Fate of Industrial America. I’ve found this book very useful in my own research and dissertating process. My presentation was based on my Pennsylvania state park timeline and HGIS methodology, which I’ve touched upon in prior blog posts, such as “Visualizing a Park System: Creating an Interactive Timeline.”

Shippensburg is located in south-central Pennsylvania, in the Cumberland Valley. The valley is gorgeous, both because of its natural features and for its historic architecture. Living in Saskatchewan, I am often surprised by how starved I am for the sight of anything old. Shippensburg is charming, as the photo below denotes, and I had the pleasure of spending two additional days there.

One morning, I went on a six-mile run along the Cumberland Valley Rail Trail, a rail-to-trail effort that runs from Newville to Shippensburg. The portion that I ran on was not overly exciting, but there was some nice farm scenery and the trail is fairly flat, except for the portion that is under construction. I had to scramble up and down this hill/road section and along the unfinished mile to Shippensburg. But it looks like lots of progress has been made in the last month.

After Shippensburg, my parents picked me up and we went westward to Cowan’s Gap State Park.

Cowans Gap State Park is a CCC Era Pennsylvania park, founded in 1937. The land on which the park was created – once part of the Cowan Homestead  – was clear-cut for the charcoal industry in the 18th and 19th centuries. The CCC reforested the parkland and built a dam on Little Aughwick Creek, which created Cowans Gap Lake.

I’m forever impressed by the technical nature and aesthetic beauty of CCC projects. If there is a man-made item in an American state park that is unique and neat, it is a 97% chance that it was built by the CCC. The spillway and dam at Cowans Gap is quite a feat. The stones were hand-placed and perfectly arranged. Why don’t we put this kind of care into our built landscape anymore?

We also visited Buchanan’s Birthplace State Park, which is located just south of Cowans Gap and managed by the same park employees. The land and memorial were donated by Buchanan’s niece, Harriet Lane.

James Buchanan's birthplace. The land and money for the memorial were donated to the state by his niece, making it one of Pennsylvania's early state parks in 1911. #envhist #pahistory #stateparks #parks #paparks #ushistory #autumn #fall #fallcolours #explorepa #centralpa #pennsylvania

Buchanan’s childhood home was moved to the campus of Mercersburg Academy in 1953.

Just north of Cowans Gap was the brilliantly named town of Burnt Cabins: “The land was owned by Native American tribes until 1758, and permanent European settlement did not start until 1763, after the French and Indian War. Nevertheless, by 1750, a hamlet known as Sidneyville had grown to 11 squatters cabins. The homes of these early settlers were burned by order of the provincial government to maintain the peace and to demonstrate to Native Americans that their ownership would be respected.”

The Grist Mill at Burnt Cabins was built in the 1750s.

Just south of Cowans Gap is historic Fort Loudoun, which was built in 1756 during the French and Indian War. The current fort is a replica that was built in 1993.

Little Aughwick Creek was full of large and very old stumps and timbered trees. I wondered if these logs date back to the logging era of the land.

On our way home we stopped at Raystown Lake. Finished in 1973 by the Army Corps of Engineers, Raystown is a massive man-made lake (largest lake in Pennsylvania) and its creation is a major event in the environmental history of Pennsylvania. The lake-level was very low when I was there, revealing the concrete lining of the lake, which highlighted its man-made nature.

My travels also took me to another man-made reservoir in Powell, Ohio. 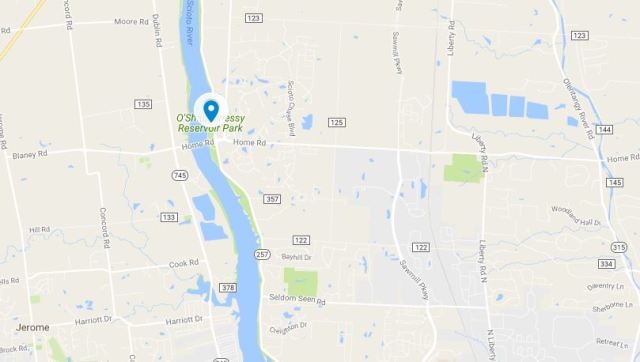 The reservoir “was built by the city of Columbus in 1925. The reservoir, created by damming the Scioto River, provided a needed water source for the city. The reservoir is 912 acres in size and has 18.4 miles of shoreline. Maximum depth is over 40 feet near the dam, although much of the water is 20 feet or less. The watershed for the reservoir is about 770 square miles and is composed of mostly agricultural land. Bottom composition is made up of rock in the south section and mud and silt in the north.”

Again, I was struck by the massive, dead trees that lined the shore. I wondered how long they had been there…how old they are.

I’m going to go out on a limb and state that state parks in Ohio are not are well-tended as they are in other states. This is just a personal observation. Not one based on figures or facts. I stopped at Mt. Gilead State Park where the fall colours were absolutely brilliant.

Another Ohio park observation is that regional and county parks are a much bigger deal in Ohio than in other states. Ashland County Parks were particularly prevalent on my journey. One caught my eye, Sprinkle’s Serenity, and I stopped briefly to check it out. The park is created on former agricultural land and “contains 15-acres of woods, an abandoned apple orchard, grasslands and 25-acres of cropland.”

A DeWitt in a wetland. This was at a small Ashland County park called Sprinkle's Serenity; I like that name and it is a shame it isn't a location option. #parks #outdoors #ohio #exploreohio #ashlandcountyparks #wetlands #nature #autumn #fall #october

One afternoon I visited Kinzua Bridge State Park located in Mount Jewett, Pennsylvania. I have memories of this park from my childhood that largely revolve around my grandfather trying to get me to go out on the bridge. I had not been there in probably two decades. The Kinzua Bridge was at one time the longest and tallest railroad structure in North America. In 2003, it was destroyed by a tornado and has been reinvented as a viewing platform. It is still an engineering marvel.

Lastly, I once again visited the old dam that I found in the woods behind my parents house. I’m unsure if this dam is a relic of the timber era or if it once held back the water simply for scenic purposes. It is however, a testament to the fact that some of the most interesting pieces of environmental history are hidden and off the beaten path, not located within the artificial boundaries of prior conservation and heritage efforts.

I didn’t post any photos of this dam from this trip, but here are a few from last year.

I found the neatest old #dam in the middle of the #woods, I think I'll write a blog post about it when I get a chance. #envhist #abandoned #history #pahistory #forest #explorepa #westernpa #pennsylvania #sigelpa

The part of the #dam that at one point broke, one can see how this changed the pathway of the #stream significantly. #socool #sigelpa #pennsylvania #westernpa #explorepa #forest #nature #envhist #outdoors #landscape #ig_countryside

Another view of the #dam, the current #stream trajectory on the left, on the right is the remnants of the old overflow/stream path. #envhist #ig_countryside #landscape #outdoors #nature #stream #sigelpa #woods #forest #westernpa #pennsylvania #pahistory #explorepa

On the other side of the defunct #dam is a clearing; most certainly where the former #pond or #lake had been. #envhist #pahistory #explorepa #westernpa #pennsylvania #sigelpa #clearing #nature #outdoors #autumn #ig_countryside #stream #forest #woods #walk