Frontier Cattle Ranching: In the Land and Times of Charlie Russell 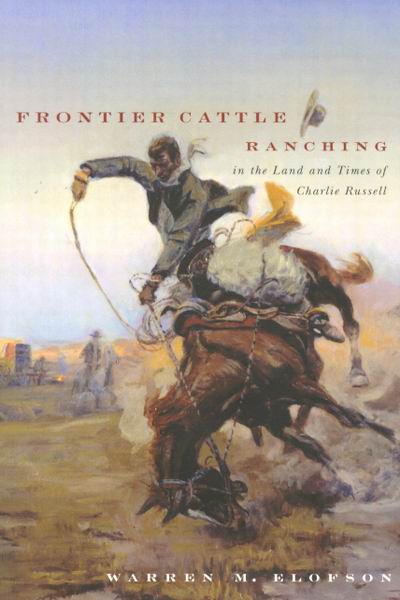 In Frontier Cattle Ranching: In the Land and Times of Charlie Russell, Warren M. Elofson, a professor of history at the University of Calgary, expands upon and tweaks the findings he made in his earlier work, Cowboys, Gentleman, and Cattle Thieves, in which he came to two major conclusions. Firstly, he suggested that the histories of ranching in the western Canadian and American frontiers were quite analogous. Secondly, Elofson asserted that the environment of the frontier affected the development of the West both in Canada and the United States. The ranchers, cowboys, and even livestock did not stick to one side of the border or the other and neither did their ideas and cultural institutions, Elofson contends. In Frontier Cattle Ranching, Elofson looks at the development of cattle ranching in northernmost portion of the Great Plains, which includes most of Montana and the southern portions of Saskatchewan and Alberta. The narrative is driven by a comparison of ranching on both sides of the border and a critique of both the similarities and dissimilarities between the two regions’ ranching experience.

Elofson argues throughout Frontier Cattle Ranching that Canadian and American ranchers in the northern Great Plains shared a common history, which is highlighted in the use of both sides of the border as inspiration for artwork created by the renowned western artist, Charles M. Russell. However, their experiences are not indistinguishable, and therefore both the resemblances and differences between the two areas need to be acknowledged and analyzed. As Doug Owram describes in The Promise of Eden and Henry Nash Smith asserts in Virgin Land, Canadian and American settlers were attracted to the Plains largely by way of government created propaganda, which relied on a false promise of ease and abundance. The American West was settled more quickly because they, at least initially, operated on free land, while Canadians had to wait for a law to be passed by the government, which granted the right to lease land in specific areas. This difference denotes the difference between the American and Canadian West, which J. M. Careless notes in his presentation of the Metropolitan Thesis because it demonstrates that the Canadian West was greatly controlled by the urban centers of the East and the federal government, while the Americans were given much more freedom to shape the West as they individually saw fit. One of the greatest similarities between the two regions is that in both the settlers adopted Old World institutions and cultural values and molded them slightly to fit their new situation. This adaptation of Eastern culture was especially prevalent in the larger towns of the region. Amongst the cowboys, the most idealized and celebrated component of the ranching system, a culture of violence and lawlessness was also prevalent on both sides of the border, as were other forms of softer entertainment such as country dances and cowboy sporting events. Similar to Anderson and Hill’s assessment in The Not So Wild, Wild West, Elofson discusses how the ranchers and citizens developed their own ways to counteract crimes, such as rustling. Additionally, in both countries, the family outlasted the large rancher as the prevalent unit of agricultural production because, Elofson asserts, the large ranching units were unsustainable.

Like Frederick Jackson Turner, Elofson places a great deal of stock in the swaying influences of the environment. The environment often determined where settlers set up shop, typically in the foothills where there was more protection from the elements, and also created a great deal of challenges for the rancher and the livestock, especially during the winter. He also demonstrates how the environment made people, particularly cowboys, tough and even caused boredom. Lastly, Elofson emphasizes the environment’s role in the demise of large-scale ranching in the northern Great Plains. The conventional explanation is that the ranchers were pushed out of the Plains by homesteaders who fenced the land and played by the rules of Eastern property law, rather than by the property laws that westerners had developed in cooperation with one another, as Anderson and Hill discuss. Elofson refutes this explanation. Instead of increased settlement being to blame, Elofson argues that cattle ranching was always doomed because it was based on an environmentally unsustainable model. The breaking up into smaller, family-owned landholdings enabled these farmers to adopt a system of mixed-agriculture, which was environmentally sustainable. Furthermore, Elofson agrees, at least partially, with Turner’s emphasis on the democratizing character of the West. Self-regulation and citizen action no doubt had a democratizing effect, he argues. Additionally, women enjoyed a much more equalized footing in the West because of the need for everyone to contribute to the race for survival. Lastly, Elofson’s study is clearly a cross-border interpretation of the West, and an attempt at considering North American history as a whole of which Walter N. Sage called for in his article, “Some Aspects of the Frontier in Canadian History.”