The West of the Imagination 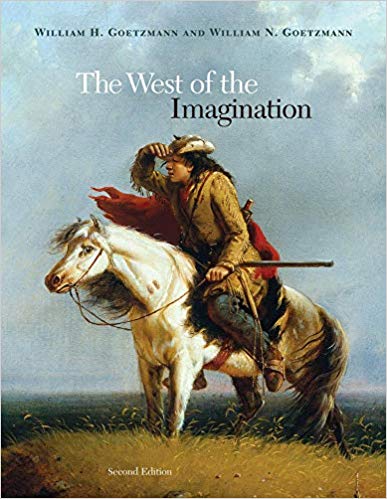 In The West of the Imagination, William H. Goetzmann and William N. Goetzmann trace the use of visual images to portray the American West. According to the Goetzmanns, visual image makers added to and continue to add to the proliferation of the western myth as much as their literary colleagues. Additionally, they argue that the art of the American West had been disregarded by the art world and unfairly deemed mediocre for far too long. One objective in The West of Imagination is to take a step towards redeeming this art’s rightful place in art history and in history in general, as it has served as a visual exemplification of the American ideal to those outside and inside the country. The book is organized chronologically and follows the major trends of western art throughout time by looking at specific artists. They begin their narrative in 1794 with Peale’s Museum, which, they contend, inspired George Catlin to take his obsession with the museum’s Indian paraphernalia to the field. The Goetzmanns describe Catlin as the painter equivalent to James Fenimore Cooper. The romanticism and noble savagery apparent in The Last of the Mohicans is also present in Catlin’s works. They go on to show examples of Manifest Destiny artwork, pastoral ideals, images of “glory,” progress, late-nineteenth century escapism, dystopian images, and finally, the recent increase in Native American answers to the myth and stereotypes.

The Goetzmanns seem to believe that they are writing at a pivotal time, 1986, during which “the exhaustion of modernism is apparent.” (x) Americans, as they attempt to grasp what is next in store, must look reflectively on what has brought them to their current position. The West, they argue is not a place, as someone like Patricia Nelson Limerick might argue, but instead a collection of frontiers. In this way, they subscribe to a Turner conception of the west, as it is a symbolic ideology, rather than a geographic region. As a collection of frontiers, the West and its diverse artistic representations demonstrate the multiplicity of experience. The West was and is something different to each individual. They also contend that western art, as a whole, is representational and was not meant, by the artists, as an abstract genre. The artistic renditions, particularly those in the earlier years, were the result of a strong scientific tradition, and were meant as pieces of information for those not able to see the West for themselves. The artists almost always approached their subject with the intentions of representing it factually, but often, due to being overwhelmed by their subject, instead, inadvertently presented their audience with a romanticized and less-than-realistic version. There were some intentional manipulations however, particularly by the turn-of-the-century with the reinstitution of the romanticized Native American and the introduction of the ultimate escapist character—the cowboy. The Goetzmanns also trace the evolution of the artists’ portrayal of the landscape. Firstly, it was portrayed as a pastoral paradise, which aided in inducing immigrants to make the journey westward. Landscapes then became grandiose and sublime; the greatness of the mountains and other vistas were demonstrated by the placement of small, human and animal figures to show the scale of the natural scene. Lastly, by the last nineteenth century, as the country had shown it could conquer the wilderness, paintings started to focus on the individual, instead of the natural scene in which they were acting.

The Goetzmanns directly link late nineteenth century artwork to the mass market paperbacks that Christine Bold highlights in Selling the West. The illustrations that were paired with these books were part of a trend towards using the west as an escapist device. It was at this point that they argue western art began to make the conscious decision to become a medium of myth propagation. In the beginning of the early twentieth-century, they demonstrate that artists were largely influenced, not by reality, but by film. As R. Philip Loy argued in Westerns and American Culture, the Goetzmanns state that the cowboy became the archetypal representation of American values. Early films, particularly those directed by John Ford, such as Stagecoach, portrayed the quintessence of the unique American character and depicted the push of Manifest Destiny in a sentimental light. The Goetzmann’s concluding section, which looks at ways that Native Americans are using art to paint their own story, is reminiscent of Edward Bushcombe’s treatment of Native Americans in film. Bushcombe concludes that Native Americans will never make westerns because that is not how they associate themselves to the past. Westerns are a white man’s concoction. Perhaps, that too can be applied to Native American art. For if the West is not a place, but rather an ideology, one to which Native Americans do not subscribe, then can their art even be considered or categorized with that of white, western artists?