The Birth of Western Canada: A History of the Riel Rebellions 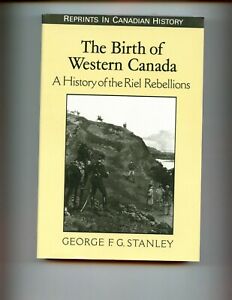 The Birth of Western Canada: A History of The Riel Rebellions is a doctoral dissertation written by George F.G. Stanley, which was first published in 1936. Stanley believed that the Riel Rebellions were two the most significant events in the history of Western Canada, and that accounts of the rebellions had serious deficiencies and were fueled by a number of fallacies. The Birth of Western Canada begins with the examination of the origins of the Métis peoples, who developed a keen sense of independence and unique identity as a result of their isolation geographically and economically due to Hudson Bay Company policies. Stanley also goes into detail about the relationship and feud between the Hudson Bay Company and the North West Company, the specifics of which are glazed over or completely left out of Harold Innis’ economic account in The Fur Trade in Canada. The Seven Oaks massacre is important, he argues, because it marks the point at which the Métis and Native Americans awakened to the threat of white intrusion. Stanley gives particular attention, as the title of the book would suggest, to discussing the particulars of both of the Riel Rebellions. The first, which occurred in 1869 -70, coincided with the granting of Rupert’s Land from the Hudson Bay Company to the Dominion of Canada. The second rebellion in 1885 occurred largely due to the fact that the Canadian government had been thoughtless in considering the needs of white and Métis settlers, and coincided with the completion of the Canadian Pacific Highway, and ended with the assurance that white settlers would dominate the West.

In The Birth of Western Canada, Stanley is writing in opposition to the accepted academic and public assumption that the Riel Rebellions represented yet another episode in the quarrel between French and English Canada, which was first popularize by the Canada First Party, as discussed in “Canada First: A Party in Microcosm” by G.M. Hougham. Instead, Stanley links the rebellions to what he calls the general problem of the frontier, or the conflict between native and white culture. The Métis rose up against the general encroachment of white civilization and its threat to their independence. This upraise was not a phenomena that could be avoided, but rather a fateful result of the inevitable fall of the racially lesser Métis. The 1885 rebellion was the Métis and Native American’s last stand against the unavoidable advancement of white civilization, and resulted in the basic annihilation of the Métis as a distinctive, officially recognized group. Like Innis, Stanley’s vocabulary and stereotypes surrounding the Métis and Native Americans denote the fact that they were of a very different generation. Stanley’s use of the term “half-breed” and the fact that he believed, like such figures as Roosevelt, Turner, and Parkman, that the Métis and Native American culture was inherently inferior to that of white civilization are rather offensive to the contemporary eye. However, one must take into account the time in which Stanley was writing. Stanley’s reinsertion of Métis agency into the story of the Riel Rebellions was revolutionary for the time period, and opened the door to further study of their involvement in the history of the west.

The connection that Stanley makes between the Riel Rebellions and the movement of the Canadian frontier relates nicely to Doug Owram’s treatment of the frontier in Promise of Eden. The ultimate victory of white expansion at the end of the second rebellion supports Owram’s assertion that the Indians of the West were seen as a substandard people and that it was the white’s duty to conquer them as well as the wilderness. Additionally, Stanley, like Owram, discusses the fear of American encroachment and possible annexation of the West and Northwest as a catalyst for frontier expansion. There seems to be no cross-border interaction in Stanley’s account to support the assertions of Walter N. Sage in “Some Aspects of the Frontier in Canadian History.”