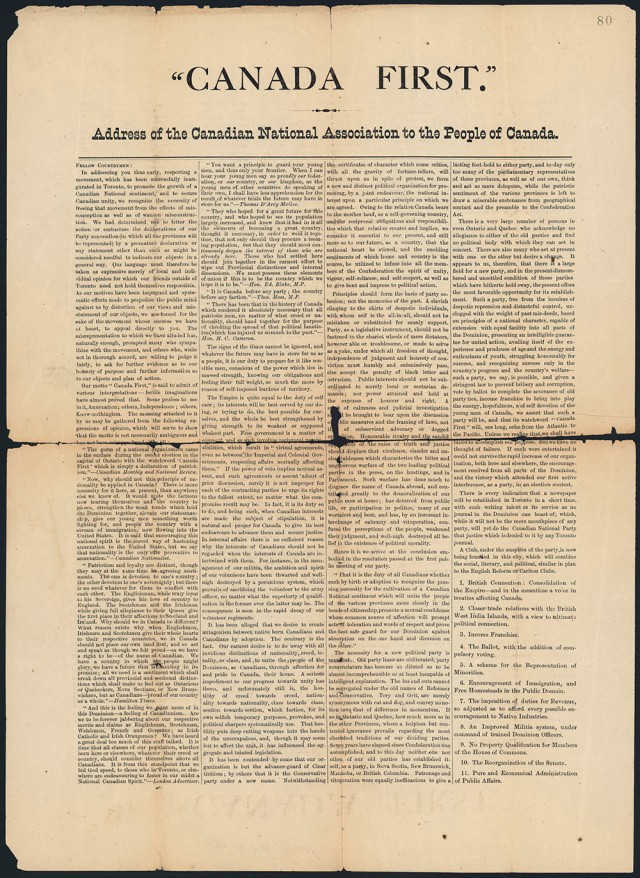 As the title suggests, G.M. Hougham presents a concise history of the Canada First party within “Canada First: A Minor Party in Microcosm.” The “Canada Firsters” were a group of middle-class men who organized a secret society for the advancement of a united, national fervor in Toronto during the 1870’s. They were known as the Canada Firsters due to their vow to put all political and individual concerns behind those of their country. Hougham writes that early in their career, the Firsters focused only on the research and presentation of papers and speeches. It was not until their involvement in the atmosphere surrounding the Thomas Scott execution that the Canada First party came into the limelight and found widespread support. Despite evading the label of political party, due to criticism of the bi-partisanship of politics, the Canada Firsters entered the political realm not by putting forth their own candidate, but by supporting the candidates of other well-established parties who they thought best represented their desire for Canada to be free of residual British rule and for Canada to foster its own identity. The downfall of the Canada First party occurred due to the naivety of its leaders as well as the many criticisms that were beset upon it by other political parties. “The leaders of Canada first,” Hougham writes, “were as unsuited to the practical task of developing an effective party organization as they were incapable of recognizing its importance.” The historical significance of the Canada First party, he concludes, was that it ignited the Canadian drive for a distinctive, national character, a drive that still exists today.

The historiographical value of “Canada First: A Minor Party in Microcosm” is that it offers a different perspective on the origin of Canadian identity and disputes some of the findings of Walter N. Sage in “Some Aspects of the Frontier in Canadian History.” First of all, Hougham denotes that comparison and intermingling with the United States was a natural and positive event, but rather one that hurt Canada and led to “fear and jealousy.” (174) Furthermore, the existence of the Canada First party challenges Sage’s assertion that the Canadian distinctiveness developed along the frontier in the manner of the United States’ identity. The Canada Firsters believed the exact opposite. Focus on the ever-broadening frontier and the transportation and development policies needed to regulate this new land led to a distracted and unconcentrated government that left little time for the development of a national conscious. Hougham further acknowledges the separation from the United States that the Canada First party espoused by including a discussion of the national fervor that developed over criticism of the Treaty of Washington. Hougham presents the Canada First party’s legacy as playing a larger role in the origin of Canada’s identity than the outside forces of America’s frontier culture.

Without being entirely familiar with Canada’s early history, it is difficult to comment on the validity of Hougham’s portrayal of the Canada First party. However, it does incite questions as to whether Hougham places too much importance in the overall effect that the Canada First party had on Canadian identity and history. Also, probably due to the fact that he was a product of his era, Hougham pays very little attention to the anti-French and anti-native inclinations of the Canada Firsters. It can be discerned that, if written today, Hougham would have been expected to address these issues in more detail. How then would his narrative have been different if he had?