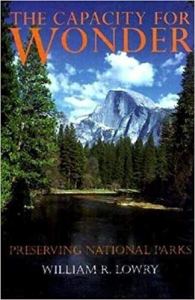 William R. Lowry is a member of the Department of Political Science at Washington University in St. Louis. He focuses on American politics, public policy, and natural resources. Lowry argues, in The Capacity for Wonder: Preserving National Parks, that he has come to the conclusion, not surprisingly due to his political science background, that the greatest menace facing parks is the behavior of government officials. Lowry writes that a government agency’s capacity for meeting its prescribed goals depends on three factors. Firstly, the agency must enjoy a political consensus that supports the agency’s objectives. Secondly, the agency must enjoy political support in the form of material resources, autonomy, and public trust. Thirdly, the agency’s employees must believe in and strive towards the agency’s mandate. Lowry states that he is going to work under the assumption that National Park employees in both Canada and the United States are completely loyal to the park system mandates. He backs up this assertion by visiting parks and speaking with their employees in order to gain a feel for their sentiment towards the current conditions of their National Park systems. The other two factors, consensus and support, operate separately, but ultimately reinforce each other, he argues.

Lowry states that a comparison of the Canadian and American National Parks Services is illuminating because both agencies had similar beginnings and operate under similar mandates. Both park systems were largely initiated, as Leslie Bella, Samuel Hays and Robert Craig Brown point out, in order to better exploit and profit from the inherent beauty of their scenery. Today, both parks operate under a similar mission to cater to the competing and often challenging goals of environmental preservation and recreational accessibility. However, in the late 1970s and early 1980s, Lowry argues that the paths of the NPS and CPS began to diverge. The superintendents and employees of the National Park Service in the United States, Lowry writes, in recent years have been “walking behind the bulldozer.” In the 1980s, the NPS fell victim to increased dispute over the agencies goals, and thus lost the thrust of political consensus. Additionally, external support for the agency, particularly its goal of preservation, fell dramatically. As a result, park officials have been drained of autonomy. Decisions and management is increasingly centralized, and decisions are being made by higher-up officials to focus less on preservation and more on short-term profit. Subsequently, employee morale has dropped significantly.

The Canadian Park Service, on the other hand, has enjoyed increased political consensus surrounding the agency’s preservationist ideals and increased public and government support. As a result the park service’s goals have been heavily streamlined into preservation initiatives, and the agency has enjoyed increased autonomy. This autonomy has led to decisions increasingly being passed to field managers, and thus Canadian superintendants, unlike their American counterparts, are walking in front of the bulldozer. Lowry, like Bella, is pro-preservation and anti-privatization. One must question whether Lowry’s assertions about the Canadian Park Service are still accurate, as government actions, such as the proposed glass walkway in Jasper National Park, signify to some that the Canada is once again favoring profit initiatives over preservation.