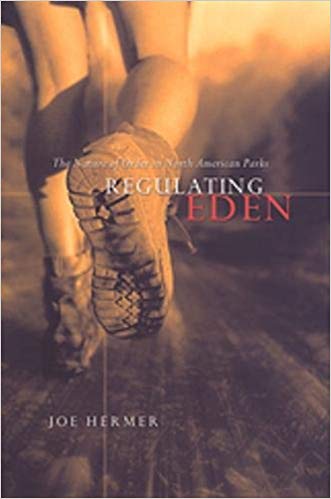 Joe Hermer is an Associate Professor of Law and Criminology in the Sociology Department at the University of Toronto. Hermer’s close childhood connection to parks and his work as a park warden impelled him to write Regulating Eden: The Nature of Order in North American Parks. When he was a child Hermer states that he experienced parks to the “extreme,” due to the fact that his father was a forester. His description of his father’s annoyance with park visitors is very relatable to one who witnessed similar occasions in their parents’ close relationship with tourists. Hermer describes a story in which a park visitor asks his father if he had any firewood that was knotless. The significance of this story is that the visitor expects a certain kind of nature that matches their preconceived notions of it. A nature that is orderly and predictable.

In Regulating Eden, Hermer applies sociology techniques in an examination of the government and people of North America’s quest to develop a “knotless” nature. Hermer states that the task of a sociologist is to demystify—although, one may question this assertion when reading some of his headier passages—and thus, pull apart the relationship between society and politics. Parks help to construct an orderly understanding of what nature is, in an era when environmental degradation is rampant, and also socially mold, through regulation, our understanding of freedom. From the sociopolitical viewpoint, Hermer attempts to examine the manner in which North American governments assemble a structured framework of what nature is and is not. The ultimate result of this structuring is the process of emparkment. Hermer defines emparkment “as an assembly of practices where space is enclosed under legislative authority in such a way that it represents an ideal of the natural that has the effect of representing an artificial world as if it were simply given.” (14) Governments use parks to assuage the masses through the manufacture of a seemingly authentic wilderness experience that is at the same time heavily regulated and confined to accepted social protocol. One of the ironies of emparkment, according to Hermer, is that it hides environmental toxification in a mist of moral acceptability. Visitors are not able to observe, nor are they encouraged to, the devastating effects their recreational activities. Yet, the greatest irony of emparkment is that ensures that nature cannot be preserved unless it is given social and fiscal usefulness through the process of emparkment.

One of the best examples of the dual function of parks in society is the role of the American park ranger and to a lesser extent the Canadian park warden. Hermer states that park rangers are the central figure of emparkment missions. They have the difficult job of acting both as law-enforcers, making sure people follow park regulations, and park hosts, making sure people enjoy their experience. Park mission statements are very telling as well as they typically make provisions for protecting the natural environment and for making this environment accessible for public consumption, which, in due course, weakens the first part of the mission. Hermer also focuses on the fact that parks are heavily regulated. Signs dot the landscape telling people what, where, and how to do things. Hermer cleverly refers to these signs as “official graffiti” and compares their system of confirmation and reassurance to signifiers used in theme parks. Specific areas are designated for specific activities at specific times of day. Conduct is regulated to ensure peace and quiet, decency, and sanitation, ultimately handing the so-called freedom of the park visitor over to the modifying influence of authority. Because activity is limited to that which is deemed proper in a natural setting, it is assumed that little harm is being done to the landscape. Yet without these forms of regulated exploitation these areas would not be allowed to resume their natural processes, but would rather be tossed back into the hands of unregulated exploitation, leaving emparkment the seemingly lesser of two evils.