Nature’s New Deal: The Civilian Conservation Corps and the Roots of the American Environmental Movement 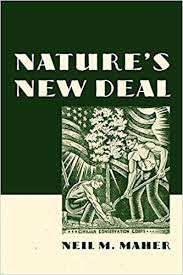 In Nature’s New Deal: The Civilian Conservation Corps and the Roots of the American Environmental Movement, Neil M. Maher presents an argument that the Civilian Conservation Corps and the broader New Deal conservation directly created two historical outcomes. Firstly, its popularity allowed Franklin D. Roosevelt to successfully move forward with the rest of his New Deal agenda. Secondly, it transformed progressive conservation into postwar environmentalism. New Deal reform was unique because it enjoyed the cooperation of individuals from opposite spectrums; urban and rural, educated and non-educated, intellectuals and farmers. Maher fully subscribes to Samuel Hays’ portrayal of progressive conservationists as a small group of elites obsessed with the efficient use of natural resources. He argues that postwar environmentalism was different because it was more grassroots in nature and because it centered on human, non-utilitarian issues, such as public health and recreation and wilderness protection. Postwar environmentalism, according to Maher, was everything that Hays had been determined to prove progressive conservation was not.

The effect the CCC had on America can most easily be seen by looking at the landscape and the vast amount of change they brought to the land through tree planting and park development. Similar to Richard White and William J. Turkel, Maher believes that landscapes can be read like documents, remnants of the past acting as just as vivid portrayers of the past as the written word. Maher argues that Roosevelt’s development of the CCC was the result, not of innovative thought, but rather a synthesis of existing ideologies that had made a lasting impression on him, including Theodore Roosevelt’s “Strenuous Life” philosophy, progressive era conservation, and most directly, the Boy Scouts. Maher states that the Boy Scouts was similar to the CCC in that it took young men, often from poor, urban neighborhoods, and exposed them to the body and mind strengthening qualities of the outdoors. Many of these men had never even heard of Gifford Pinchot or any conservation policies upon arrival, but were readily made into ardent conservationists, helping to spread environmentalism to the working-classes and to increase bi-partisan support. The CCC was also seen as a way in which to Americanize young immigrant men, thus further extending the program’s reach.

Members of the CCC participated in two kinds of labor. The first kind of labor involved reforestation and soil conservation. The CCC planted over two billion trees. The second kind of labor was the development of over 800 state and national parks. Maher argues that the CCC’s development of parks connected conservation to health and wellness ideology and concern for the conservation of “human” resources. However, if one looks at state park literature, one finds that this kind of health connection was being made in the early twenties, well before the CCC was underway. Due to their deep connection to rural life, the CCC played a major role in transforming rural communities in and around their projects. Maher gives the example of Coon Valley, Wisconsin, where the CCC gained support by improving the productivity of their farmland, and a community in the Smokey Mountains, which enjoyed the fruits of tourism precipitated by a CCC recreational project. However, these very same changes brought the CCC under scrutiny. Two major figures brought the program under conservational fire. Aldo Leopold and other scientists attacked the CCC for upsetting ecological balance. Bob Marshall led a campaign to condemn the CCC for threatening wilderness through development.

In its early years, the CCC and subsequently the rest of the New Deal enjoyed positive media coverage, which helped to popularize its new proletariat image and made the CCC and conservation practically one and the same in the eyes of the public. However, in the later 1930s, under the growing criticism of individuals such as Leopold and Marshall, the CCC and the New Deal’s image began to falter. This faltering was not due simply to displeasure with the New Deal argues Maher, but rather because the very concept of what conservation constituted was in a state of instability. Roosevelt tried to save New Deal conservation and the CCC by creating a Department of Conservation under the “third new deal,” and also turned toward more ecologically sound policies, such as the National Planning Board. However, the fate of the CCC and New Deal conservation was already sealed. In 1942, the CCC plug was pulled. Nonetheless, Maher contends that the ultimate failure of Roosevelt to continue New Deal legislation under the beacons of ecological planning and total conservation, forced the populace to pick up where the government left off. And thus, the origin of the grassroots environmentalism of future decades, illustrated by the Echo Park Dam victory in 1955 is revealed.