Conservation and the Gospel of Efficiency: The Progressive Conservation Movement, 1890-1920 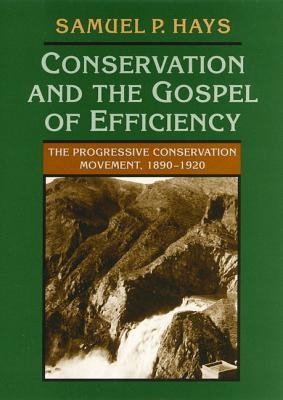 In Conservation and the Gospel of Efficiency: The Progressive Conservation Movement, 1890-1920, Samuel P. Hays’ main goal is to revise conservation history by pointing out the flaws of accounts written by prior historians and offering a more factual explanation of the era. Hays focuses on the ideas of the conservation movement, rather than the policies, in order to set the record straight. Conservation history, according to Hays, has nestled into a comfortable niche from which historians can easily play to the emotions of the public, inciting contemporary conservationist fervor. The popular narrative outline is one of morality: the upright citizenry, backed by conservationists, fighting to loosen the malevolent grasp that corporate interests held on the nation’s natural resources. This interpretation of the time period is markedly skewed, rightly argues Hays. The main mistake that these historians have made is that they have failed to separate conservation rhetoric from the reality of conservation policy. Conservationists did not go to arms on account of public protest, nor were corporations always the enemy. In fact, many “commoners” objected to conservation tactics, while many of the biggest proponents were corporations and their respective barons.

If conservation was not a movement of moral, democratic zeal, then what was it? Hays contends that conservation was instead a scientific movement that was based not on a longing for the good ol’ days, but rather on the embracement of science, technology, and the exciting future modernity had in store. Efficiency was the name of the game. Efficient use of resources, not the preservation and protection of resources was the ultimate goal. Roosevelt, the paterfamilias of conservation, supported the movement, according to Hays, because he loved the outdoors, but even more so because he respected this new cult of organization. The broader implication of the conservation movement, Hays writes, is that it took a decentralized and unorganized country and made it into a finished country that was structured, centrally planned, and socially organized.

Historians have failed to come to this conclusion before because they have been too devoted to the anti-corporation, pro-commoner model, which Hays refers to as a “political mythology.” They have focused on events and details that uphold their interpretation, while ignoring those that do not fit as readily. For instance, historians have ignored key conservation programs that do not necessarily fit into the public’s perception of the movement. Water management, particularly in the West where Hays argues conservation originated, is an example of the kind of program that does not conjure up visions of tree hugging. Irrigation and reservoir building were examples of ways in which conservationists developed tactics by which resources could be more efficiently used in order to halt population loss. Range conservation and even forestry, both connected watershed protection, are also examples of how manage the environment. These were not grassroots movements, but rather efforts made by a very small, select group of people, headed by Roosevelt and Gifford Pinchot, who actually distrusted the public’s ability to manage their own resources. Public intervention was seen to be necessary. Otherwise, the ignorant public was likely to squander their natural resources. Experts were the only individuals that could properly oversee these policies, a belief that often put Roosevelt at odds with Congress and others who challenged his use of executive muscle, like Taft who argued Roosevelt disobeyed the Commerce Clause of the Constitution by interfering with waterway management in matters other than navigation. When the upper and middle-class became enamored with conservation after the Governors Conference in 1908, Pinchot was not pleased with their concern, but rather distrusted the emotional fervor they were placing on the movement.

Hays attempts to disrobe Pinchot of the heroic robe he has often been bestowed. “Pinchot’s vigorous attempt to direct conservation into those limited channels he preferred to stress, and his refusal to compromise with those with whom he differed played a large in role in splintering conservation organizations, contributed to conflicts among resource groups and to personal bitterness among their leaders,” (198) Hays states. Pinchot’s actions during the Hetch Hetchy controversy illustrate this inelasticity. The main historical account that is inaccurately portrayed by historians and subsequently leads to Pinchot adulation is that of the Ballinger-Pinchot controversy. Ballinger, Secretary of the Interior at that time, was very unpopular with Pinchot and other conservationists. Ballinger was accused by Louis Glavis of helping corporations gain larger pieces of property in the Alaska coal region than they were lawfully permitted. Hays argues that this event further confused conservation problems and simplified complex disagreements to issues of personal integrity. The controversy inaccurately portrayed Ballinger as a villain and Pinchot as a hero, and originated the myth that the conservation movement was pro-common people and anti-corporation. Hays’ assessment of the conservation movement stands up to the test when one considers evidence from the time period. When researching for my Master’s Thesis, the sources that I found and utilized support his claims.

Feature Photo: “President Theodore Roosevelt and Chief Forester Gifford Pinchot — T.R. and G.P. — on the river steamer Mississippi This picture was taken on the trip of the Inland Waterways Commission down the Mississippi River in October 1907.”