I decided to publish my write-ups from my comprehensive exam reading fields. I am publishing them *as is.* Thus they represent my thoughts as a new PhD student. They were written between September 2011 and July 2012.  The full collection is accessible here.

Man’s Role in Changing the Face of the Earth 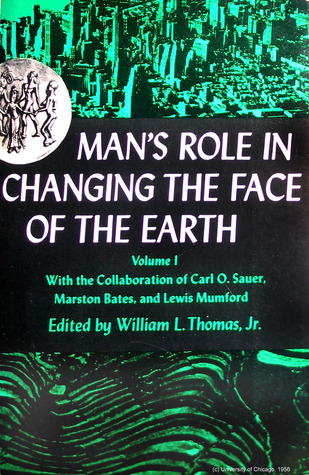 What initially stands out about Man’s Role in Changing the Face of the Earth is the fact that it is dedicated to George Perkins Marsh, thus, readily letting the reader know that the work is greatly committed to furthering the ideas that Marsh set forth in Man and Nature. Published in 1956, Man’s Role was the result of an international symposium and was the first large-scale project to be compiled that assesses man’s affects on the earth. It served as an outward acknowledgement by the academic community that man does indeed transform the environment and its natural processes and structures. The interdisciplinary nature of the book is quite obvious as early as the title page, as the disciplines of anthropology, geography, zoology, and history are represented by the main editorial contributors.

Man’s Role is divided into three parts: retrospect, processes, and prospect, of which the first two offer particularly interesting analyses. Within “Retrospect,” the researchers seem to have come to a decided conclusion regarding Marsh’s question as to whether man was of nature or above it. Man, according to many of the writers, is more powerful than or at least equal in power to nature. In “Our World From the Air: Conflict and Adaptation,” E.A. Gutkind describes nature and man as “twin agents,” both making equal contributions to the reshaping of the landscape. Gottfried Pfeifer presents nature as a “more passive partner” in “The Quality of Peasant Living in Central Europe.”

Another key theme in “Retrospect” is the examination of the role culture has on man’s interaction with the environment and the declaration that different human groups have had different experiences in regards to the earth. Discussion of the Indian practice of declaring forests sacred in E.K. Janaki Ammal’s article (330) is a fine example of this kind of cultural consideration. However, Clarence J. Glacken does not adhere very well to this theme within “Changing Ideas of the Habitable World,” as his observations are often Christianity-based and rather Eurocentric.

In Part Two, “Processes,” the writers give much less reverence to man’s power to change the environment. It is acknowledged that man is highly evolved; however, as Paul B. Sears commented, “often overlooked is the fact that [man] exists by virtue of an environment which is itself highly evolved and specialized.” (471) Humankind is endangered by its belief that it can continue to adapt to whatever changes it makes to the landscape.

Although differing on the exact magnitude of man’s power to change the environment, both sections come to the conclusion that it is man’s ethical responsibility to try to fix the problems that they have kindled by way of negligence and the ever-tempting promise of progress. As Gutkind would note, man is moving from the stage of aggressiveness and conquest and into the final stage of responsibility and unification. Man must restore the balance that Marsh believed was so crucial to the wellness of the earth.

Man’s Role is an incredible achievement. It contains so many opinions and pieces of information that it would take a great deal of time to fully dissect everything that the project has to offer. It is interesting to see the similarities in the environmental concerns of the 1950s and of the present-day. Solar energy is mentioned quite a bit and is deemed a “reasonable probability” (473), yet we still have not perfected the technology. Also, Sears’ following observation, “while some of [man’s] activities may regulate and utilize these (natural) changes to his benefit, more of them serve to accelerate the rate and widen the scope of natural changes in ways that lower the potential of the environment to sustain him,” (481) eerily relates to today’s global climate challenges. Perhaps the most interesting article is James C. Malin’s “The Grassland of North America: Its Occupance and the Challenge of Continuous Reappraisals.” Using such language as “assumption” and “supposedly” it is hard to tell whether Malin is fully serious or just playing devil’s advocate. Either way, Malin certainly causes one to think about the pre-conceived notions that we bring to the table and to whether the environmental issues that are being addressed by academia and science are truly existent or just constructs of the human mind in an effort to assuage our need for the dramatic.

Feature Image: The San Juan Generating Station, flanked by its surface coal mines on the desert north of the San Juan River west of Farmington, New Mexico. By Doc Searls