I decided to publish my write-ups from my comprehensive exam reading fields. I am publishing them *as is.* Thus they represent my thoughts as a new PhD student. They were written between September 2011 and July 2012. This is the first in such posts. The full collection will be accessible here. 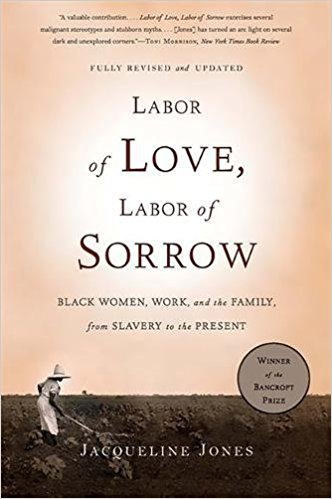 Jacqueline Jones’ Labor of Love, Labor of Sorrow: Black Women, Work, and the Family from Slavery to the Present (1985) and Eric Foner’s Reconstruction: America’s Unfinished Revolution, 1863-1877 (1988) both represent the historical scholarship that was being produced in the United States dealing with the Reconstruction Era during the mid-1980s. Labor of Love is a work of social history. It is the story of the African American woman’s plight before and after emancipation. Contemporary concerns significantly shape Jones’ narrative. Despite the outpouring of women’s histories, Jones finds that historians have ignored the special experience of African American women, whose experience has been shaped by the dueling prejudices of gender-bias and racism and their resulting oppressions. Bringing these issues to the forefront of American History is crucial, according to Jones, because they have resulted in the travesty that is contemporary welfare policy.

Jones brings a personal, feminine understanding and a liberal viewpoint to her subject, resulting in a compassionate narrative of the struggle of African American woman to perfect the balancing act of work and family, sprinkled with trenchant, though not undue or exaggerated, criticism of the forces that caused these complicated situations. Labor of Love is a history of dichotomies: family life vs. workplace, white women’s experiences vs. black women’s experience, rural vs. urban, women’s work vs. men’s work, feminine prejudice vs. racial prejudice, etc. From the beginning, describing the book as a narrative “about the work and family life of women whose foremothers were brought to this country in chains as slaves,” (3) Jones deliberately sets the stage for a historical analysis that underscores the exceptional and heroic experience of the African American woman, an individual who Jones believes has encountered more difficulties and roadblocks than any other subset of the population.

What is under constant attack from outside forces is their ability to properly raise and take care of their families. Their success in the face of adversity is what Jones believes makes them particularly courageous. The oppression began, of course, on the plantations of the South where slaves were continuously dealing with their white owner’s attempts to manipulate not only their working hours, but also their personal hours. Black women were expected to work in the fields or the household all day and to come home and raise the next generation of workers. Once emancipated the role of black women did not change substantially. They were forced to work outside the home, in any low-paying job that they could get. Thus, the fruits of the Post-Civil War world granted not individual freedom, Jones states, but freedom in the familial sense. Black women now had the ability to earn money and educate their children so that they may finally escape the exploited past of their ancestors. In the modern job market black women especially felt the strangling influences of racism and sexism. Jones expertly interweaves the forces that have led to current stereotypes surrounding black women, such as the lazy, promiscuous, welfare dependent mother and the clichéd, bossy black woman. One also sees an inkling of other social forces that would later erupt into the urban crisis that Thomas Sugrue describes. 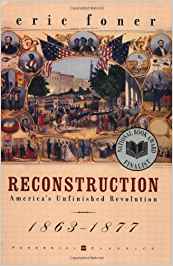 Foner takes on the era of Reconstruction from a much different angle. One of his foremost goals is to transcend the trend of the compartmentalization of history that he thinks has caused Reconstruction historians to lose focus, of which Jones’ Labor of Love, Labor of Sorrow is an example,. Though virtuous in its own right, the new history has led to the lack of a cohesive narrative upon which everyone can agree or at least come to a compromise. Foner’s main ambition is to provide such a unified narrative. Essential to this narrative is Foner’s effort to include the black experience and to make it central to the story. Both Jones and Foner are dedicated to showing that African Americans were not meek, victimized pawns, but active participants in fighting their way to autonomy and equality. Jones uses firsthand accounts and details of the inner sanctums of the household to illustrate this autonomy, while Foner uses political and economic factors. Black independence is only one of the themes in Reconstruction though, as Foner has a much larger and intricate goal than Jones. To understand the black experience, one must also understand the changes that were occurring in the white realm, and to understand the South’s experience one must understand the changes that were occurring in the North, he asserts. Jones also touches on the white woman’s experience and the happenings in the North, but only in regards to how they affected the black woman’s sphere; Foner attempts to give everyone equal footing.

Foner’s Reconstruction is an exceedingly complex narrative. Foner describes the happenings of the outside world in which Jones’ tale takes place, but of which Jones gives little attention. One piece of the puzzle that Foner illuminates is the governmental changes that were happening at the state and federal level. Foner weaves the effects of constitutional amendments, progressive and regressive racial legislation, and the ineptitudes of Andrew Johnson into a story that ultimately illustrates the increasing expansion of the national state. Foner also gives equal due to the importance of industrialization, particularly in regards to the North’s relationship and hold over the South. Ultimately, Reconstruction is a narrative about modernity and the establishment of the modern American state, whose only major folly lay in its treatment of women, African Americans, and other minorities. Above all, Foner’s portrayal drips of honesty. His approach is even-handed, his descriptions are not sensational, and he does not seem to be flaunting the ideals of a particular group, however this is not to say that he does not bring his own personal biases to his work, as every historian does. Reconstruction, according to Foner, was a failure, but it did have a lasting, positive effect on the country. Its accomplishments, though squelched by the Southern Redeemers, planted the seeds for the slow process of ridding the country of racialization, of which we are still a part. The women in Jones’ narrative were largely left out of the successes of Reconstruction because they were not only held down by the laws of racism, but also because they were of the weaker sex. Their climb has always been a slow struggle. Perhaps more biased, but equally as justified as Foner’s narrative, Labor of Love presents the reader with a story of determined love for family and resolute strength in the face of adversity that is truly admirable. Jones illustrates the energetic spirit of Reconstruction through the experience of a small part of the demographic, while Foner captures this same spirit at the macro political and economic level.