The following are my editorial comments for the Autumn 2016 Issue of Folklore Magazine. To subscribe to the magazine and to become a member of the Saskatchewan History and Folklore Society, go here and complete this form. Also follow SHFS on Facebook. Cover Photo: Darlene S. & P-ZZ. South Fork. 1 July 1951. Everett Baker Slides.

I have intently followed the progress of SHFS’s Summer 2016 Mystery Marker Contest on the organization’s Facebook page for the last several months [see this issue’s SHFS bulletin for more information]. The contest, which was designed as an interactive and innovative way to update SHFS’s Historic Markers Program, incited me to start thinking about the way in which we organize and delineate historic moments and places both physically and in our personal and collective memories.
By definition, historic markers, like the St. Elizabeth School District marker [not an SHFS marker] featured in Joseph. G. Nagy’s article, are
“signs, plaques, or monuments that memorialze a person, site, or event and contain interpretative material about its subject.”1 The SHFS Historic Markers Program is valuable because it provides a physical space or point at which Saskatchewan residents can gather to communally experience the past. The use of place in this manner enables visitors to transcend time, to connect spatially and emotionally to a past that has otherwise disappeared.
The idea of a historic marker can, in my opinion, take other, less official forms. In a way, historic markers always grace the pages of Folklore in the form of photographs. Hanno Hardt and Bonnie Brennan describe photographs as “historical markers in the culture of society” in Picturing the Past: Media, History, and Photography. Photographs are embodiments of moments in time, markers of the past scattered throughout the present. The photographs that accompany Herb Kruger’s memories bring his childhood to life, bringing a valuable dimension to these “captured stories.” J. Alvin Speers’ photograph of his father acts as a marker for a person: his father; a site: Prelate; and an event: early twentieth-century farming and farming technology. The interpretation of this photographic marker lies in the mind of the viewer.
Maps, like the one on page 7 that spurred Carl Krause’s journey of discovery, are also a kind of historic marker. They represent a specific understanding of a place at a specific point in time for a specific purpose. What is included on a map is just as important as what is not included. In this case, the inclusion of a little-known site from the past, Fort La Montee, on the map, blends with physical remnants of the fort on the landscape and local memories and knowledge to create a renewed aura of folklore around the site.
The spruce tree in Peggy Hayes Looby’s story acts as a personal marker for the life of a loyal, furry friend, as well as the memories of childhood. I know that I have several of these markers in my own life, places and objects that elicit memories from my early youth that usually leave a bittersweet feeling in my heart. In “The Chatelaine,” a piece of family memorabilia serves as a physical connection to an ancestor’s past.
The pages of this issue of Folklore are also filled with personal memories and stories whose mark on the world come primarily in the form of oral stories and written word. Victor Carl Friesen fondly remembers the intersection of fantasy and reality, film and education, during his stint at the Saskatoon Normal School. Kay Parley relays a particularly stressful occasion in Regina’s past; a night when anger and fear stoked by international events boiled over into violence.
As the weather starts to turn this fall and the chill returns, I encourage all of you to sit down and record some of your own memories or those of your loved ones. 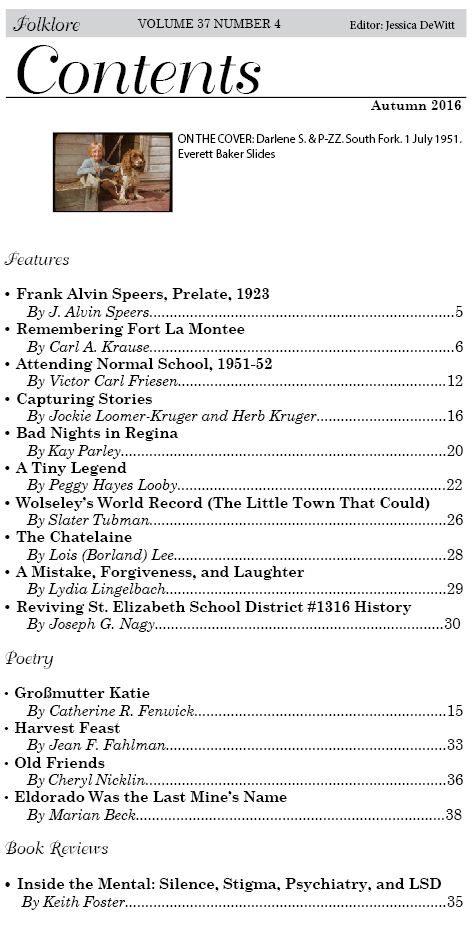