I decided to publish my write-ups from my comprehensive exam reading fields. I am publishing them *as is.* Thus they represent my thoughts as a new PhD student. They were written between September 2011 and July 2012.  The full collection is accessible here.

The Ecology of Invasions: by Animals and Plants 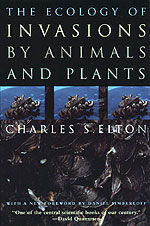 Charles S. Elton was an English zoologist and animal ecologist, who was particularly interested in the concepts surrounding animal populations and ecological niches. The Eltonian Niche is a specific way of defining an ecological niche that Elton developed, in which the physical attributes of animals were compared to the position that they held in the region’s food chain. Elton was also the pioneer of invasion ecology, and, as the title suggests, The Ecology of Invasions: by Animals and Plants is an examination of his findings and insights in this field. Like George Perkins Marsh, Elton is concerned with the upset of balance within the environment. Unlike Marsh, Elton does this by examining the population “explosions” of various plants and animals around the globe. This is not to say that Elton disregards human involvement. In fact, Elton stresses that ecological invasions occur most often in land that has been modified by man and as the result of man moving around the earth.

Elton believed that man’s ability to develop the proper technology needed to restore natural balance was incredibly crucial to the future and is a key theme throughout The Ecology of Invasions. “By the end of the book,” Elton asserted:

I intend to carry the argument that we are faced with the life-and-death need not just to find out new technological means of suppressing this plant or that animal, but of rethinking and remodeling and rearranging much of the landscape of the world that has already been so knocked about and modified by man; while at the same time preserving what we can of real wilderness containing rich natural communities. (110)

Like Marsh, Elton views man as a natural disturbing agent. The drive to modify natural processes, such as the food chain, is one that is innate in human nature. However, contrasting Marsh, Elton did not believe that returning nature to its virgin-like state was necessarily a desired or achievable goal. Instead, man should learn to manage his artificial environs in a manner that supported natural balance and fought to quell the sudden population increases of invasive species that he believed caused so much turmoil.

Similarities between Braudel and Elton can also be discerned. First of all, Elton also pays attention to long-term structures, predominantly in regards to population patterns in nature. Secondly, Elton treats the invasive populations that he looks at in much the same manner that Braudel looked at the Mediterranean. Elton fully acknowledges that these populations cannot be properly investigated without taking into account the fact that they are also products of overlapping with other specie populations as well as their interaction with the habitat as a whole. This treatment is reminiscent of Braudel’s emphasis on the fact that the Mediterranean was not an isolated region, but in fact the product of interactions with its neighbors as well.

On first glance, it may be hard to distinguish what about The Ecology of Invasions can be considered historical. However, on closer inspection one recognizes that what Elton refers to as “faunal history” is the main theme of the book. “It is one of the first themes of this book,” Elton wrote, “that if we are to understand what is likely to happen to ecological balance in the world, we need to examine the past as well as the future.” (33) Within The Ecology of Invasions, Elton further concretizes the legitimacy of interdisciplinary research within the historical process.

The Ecology of Invasions is an enjoyable read largely due to the energy that Elton incorporates into the work. With language such as “ecological explosion,” Elton brings a sense of urgency to his writing that makes the book engaging for the reader. He also presents his research and theories in clear and concise manner that allow the reader to gain a clear understanding of the origins of the invasive species epidemic, an issue that is still at the forefront of ecological problems.

“Phragmites: An invasive plant in the Platte Valley. It sucks up valuable water and grows in dense stands which tend to channel stream flow and worsen erosion. It’s pronounced “frag-my’-tees.” Photo by John Lillis.